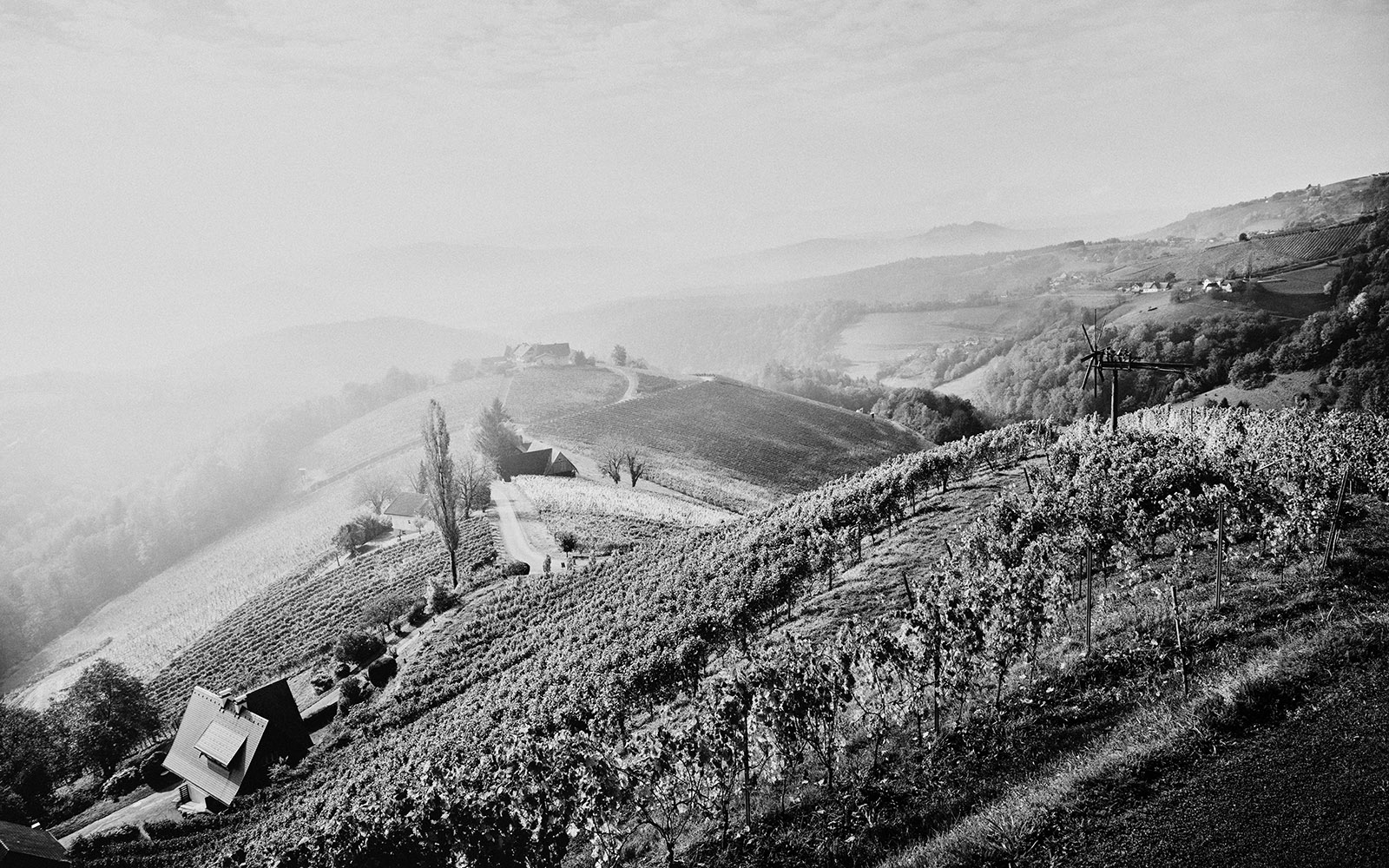 The Kitzeck-Sausal district is often referred to as an ‘inselberg’, a geological term referring to a standalone peak. It certainly contrasts sharply from the rest of South Styria. Below the surface are several of the oldest stone formations anywhere in Austria, created over 400 million years ago during the Paleozoic era when the land rose out of the primordial sea — hence the reason its barren slate soils are completely free of chalk. The witness to this natural spectacle is the raw, almost monumental landscape surrounding the town of Kitzeck, with impressively steep vineyards and numerous terraces. The vines grow primarily at elevations from 400 to 650 meters above sea level, providing their own unique microclimate.

Climate – Influenced by the Alps and the Mediterranean
Kitzeck-Sausal is the coolest village appellation in Südsteiermark, and strongly influenced by alpine air currents. The steep southern exposition and coolness from the Alps deliver massive diurnal shifts, tempered by slate soils that store the day’s warmth and release it slowly by night. This singular constellation is reflected in the aromas of the ripened grapes, which tend towards complexity, intensity and a pronounced minerality.

Gebietsweine (Regional Wines)
Dry wines from hand-harvested grapes. After at least a half-year of maturation in barrel or stainless steel, these wines are released onto the market on 1 March. They offer a fine representation of the diversity found throughout Südsteiermark.

Ortsweine (Village Wines)
Every village in Südsteiermark is unique. Village-level Ortswein offers an ideal platform for highlighting those differences. Weingut Wohlmuth’s Kitzeck-Sausal Ortswein are inherently imbued with the classic minerality that flows from the slate soils that define the area. To give voice to that origin, the Ortswein are afforded a longer maturation, and are bottled only after 7 to 12 months in large barrels.

Riedenwein (Single Vineyard Wines)
These highly expressive wines give strong voice to the terroir of their specific Ried. As STK members, the Rieds are divided into Erste and Große STK Rieds. Wines from Erste STK Rieds must be matured for a minimum of 12 months in large wooden casks, while wines from Große STK Rieds must be granted at least 18 months. Singular wines of tremendous aging potential. 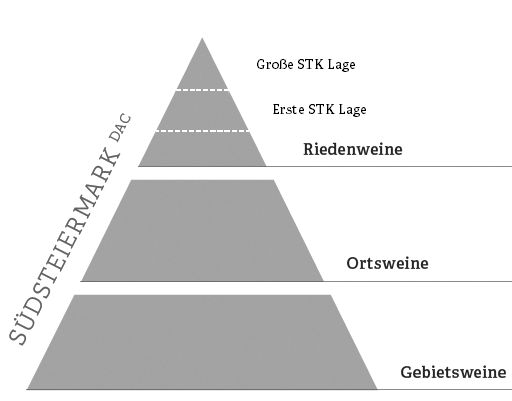 Historical single sites
Austria, unlike other German nations, denotes its single vineyards with the term “Ried.” The potential at play in the Rieds of Kitzeck-Sausal was clear even to early settlers and was documented by name in 1322 by the Archdiocese of Salzburg. This included Ried Edelschuh, which for decades has been in the possession of Weingut Wohlmuth. In fact, each Ried that the Wohlmuth family owns, tends, cultivates and in some cases painstakingly re-cultivated has for centuries been counted among the most treasured and finely structured historic single sites in Austria.

Ried – An embrace of origin
Origin is the greatest treasure for the Wohlmuth family. To differentiate themselves from branded wines, each classified single vineyard receives the suffix “Ried.” This historical term, specific to Austria, derives from the Old High German word “riod” and refers to the clearing (“roden”) of a forest to make space for viticulture.

Ried Edelschuh is one of the estate’s most extreme and inhospitable single sites. With gradients reaching from 73 to 90%, nothing short of pure manual labor will do. Yet it is also one of the most fascinating pieces of terroir anywhere in the Südsteiermark — with barren black and red phyllitic slate laced with numerous veins of quartz. In this warm site, grapes ripen with notably high extract levels and a taut acidic structure courtesy of the high elevations. Due to the very late and Botrytis-free harvest, the wines here tend toward complexity and cellarability, with a challenging minerality. The Edelschuh site was documented as one of Austria’s finest vineyards as far back as 1322.

For centuries, this Ried has been well documented as one of Südsteiermark’s finest vineyard sites. Ried Hochsteinriegl has been in the family’s hands since 1803. It was here that their winegrowing story began, in the form of a small vintner’s cottage. And why it is still so near and dear to the family’s heart. In the local dialect, the adjective “hoch” actually means “extremely steep.” And indeed, the extremely steep and high-situated classified single site with a pure southern exposition and shaped by barren slate soil, requires almost uniformly hand labor.

The distinctive orientation, elevation and exposure to the nearby Alps brings notably quick and cooling temperatures to this vineyard by night, which in turn promotes intensive aromas. The extremely sparse red phyllitic slate soils convey a distinctly spicy character to the wines.

The vineyard lies to the southeast and east of Ried Steinriegl and is one of the estate’s warmest sites, capable of lending its Pinot family wines enormous power. The strong slate minerality gives fruit grown here a unique finesse that is retained even at high levels of ripeness. Its name is of Slavic origin and means “naked,” referring to the barren, slate-dominated soil.

Our highest classified site, fully opened toward the Alps. The extreme exposition allows us to harvest here very late yet completely without Botrytis, preserving the influence of the barren slate on the wine’s aromatics. These wines are linear and nuanced, reflecting a taut exchange between coolness and warmth.

Ried Dr. Wunsch is one of the earliest and most esteemed classified sites in Kitzeck-Sausal, and for centuries has been counted among the finest Rieds in Südsteiermark. The descriptor dates back roughly 150 years to a noble landholder from Graz whose wines earned respect well beyond the region. Opening up toward the Alps, with a high elevation and southerly exposure, this vineyard and its steep and extremely barren slate soil is surely among the finest cradles of Riesling anywhere in Austria. It has been laboriously recultivated by Weingut Wohlmuth, which also added terracing.

Ried Urlkogl is located in Gamlitz, near the border to Ehrenhausen, and its grapes are used primarily for our regional wines. Starting with the 2020 vintage, single vineyard wines are once again being sourced from these 40-year-old Gewürztraminer vines. The high, southwest facing Ried has excellent circulation. This site, the warmest owned by the estate, delivers spicy and intense aromatics marked by a portion of limestone in the soil.

In 2002, the Wohlmuth family acquired vineyards in Neckenmarkt, a wine village in the Mittelburgenland that is for good reason known as one of the nation’s most thrilling terroirs for Blaufränkisch. The estate’s holdings include sites on the Hochberg, such as Ried Rabenkropf, one of the most prestigious single vineyards in Neckenmarkt. The soils are shaped by clayey slate and fossil limestone, an ideal foundation for red wines of minerality and cellarability.